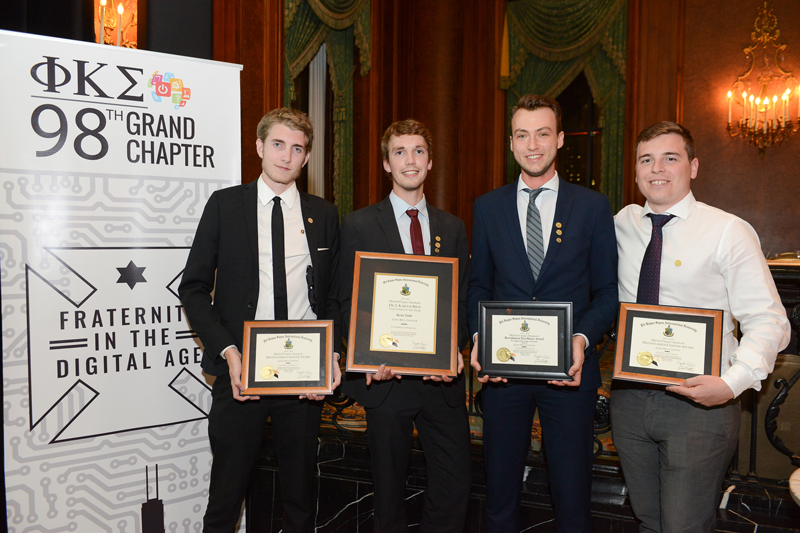 The recognitions, awards, and honors listed below are bestowed on their respective honorees at the active member, chapter, and alumni level. These awards cover the five objectives of the Fraternity, as well as a focus on philanthropy and community service.

Many are named in honor of the brother or chapter that pioneered a focus on that part of the organization. We have honored those individuals by naming an award in their honor. Awards are announced during the Grand Chapter for the previous two years’ recipients.

The awards offered each year are listed by category below.

Hutchinson Key
Named after founder Charles Hare Hutchinson, Alpha Chapter, University of Pennsylvania 1850 is awarded to the member in each undergraduate chapter who exhibits the greatest academic improvement in his scholastic achievement in the course of an academic term, provided that his average is higher than the overall men’s average at his institution. This award is presented to the member by his chapter, in the form of a small gold key. 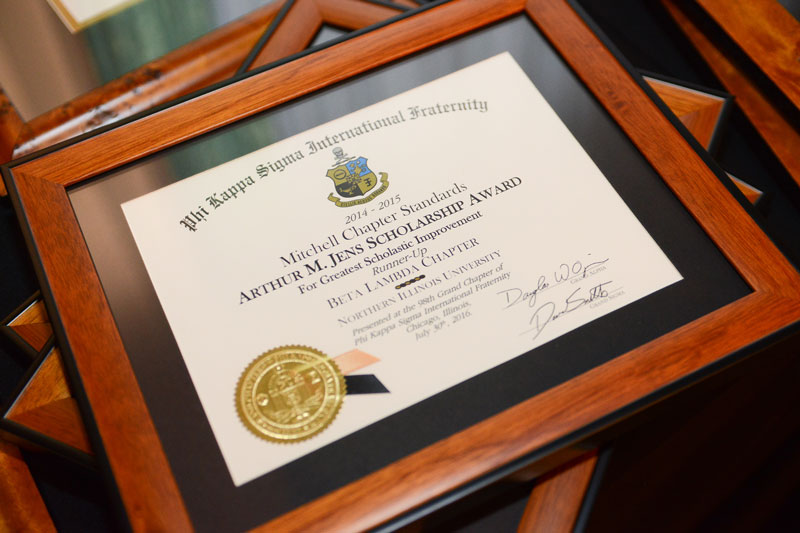 The Dr. Ghery D. Pettit Scholarship Award
Named after Past Grand Alpha Dr. Ghery D. Pettit, Alpha Lambda Chapter, UC Berkeley 1946 is awarded to any chapter of the Fraternity that achieves the highest scholastic rank among fraternities at its institution, for either an academic term or year. College or university certification is required.

Emerging Leader Award
Is bestowed annually to a young alumnus having graduated in the last 15 years based upon his early professional accomplishments. This could include participating in groundbreaking research, founding a successful business, or helping to grow their industry in a unique way. Outstanding contributions to his community, either by public service or by participation in humanitarian projects, will also be factored into the selection of the recipient. 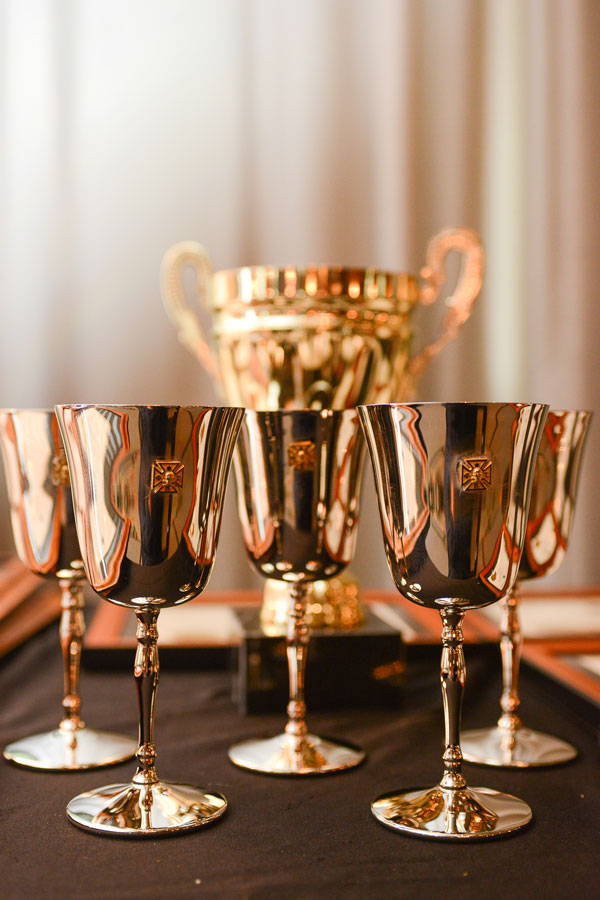 Chapter Excellence Award
Is awarded to chapters that have become well-balanced in all areas of Fraternity life. Recognition is determined by Mitchell Chapter Standards Program scoring

Most Improved Chapter Award
Is given to the chapter which exhibits the most improvement from one academic year to the next. The determination of the award winner will be based on recommendations from the International Headquarters Staff, Regional Grand Deltas and Assistant Grand Deltas, as well as Chapter Advisors. Mitchell Chapter Standards Program scoring may also be used in determining recognition.

Chapter Newsletter Award
Is presented annually to the chapters whose publications are judged to be superior by the awards committee. The criteria include layout, design, and quality of content.

Alpha Omega Song Award
Is awarded to the chapter that submits a recording, lyrics, and music of the best new Phi Kap song. This award was presented to the Fraternity by the Alpha Omega Chapter, University of British Columbia.

Grand Chapter Attendance Recognition
Presented at each convention to the chapter that receives the highest attendance score, derived by multiplying the number of undergraduate representatives attending by the number of miles traveled from their chapter to the convention site.

Neal L. Hospers Outstanding Undergraduate Award
Named after Past Grand Alpha, Neal L Hospers, Alpha Psi Chapter, UCLA 1945 and Alpha Rho Chapter, Cornell 1948 is given to the best all-round Phi Kap undergraduate leader. The criteria used for the award is based upon 50% for campus & community activities, 25% for Fraternity activities and leadership, and 25% for scholastic excellence. Each chapter nominates a member for the award who, in turn, is judged against other men within his region. From the regional nominations, one international winner is selected.

Humanitarian Award
Is given to an active or alumni members to recognize humanitarianism in our world. This award is bestowed upon those who have demonstrated such acts. A Humanitarian can be defined as an individual who has the courage to take decisive action needed, the wisdom to face aggressive challenges, and the willingness to sacrifice to affect these causes that have a long-term impact on the betterment of the community, society, or the world.

Phi Kappa Sigma Lifetime Contribution
Is given at the discretion of the Executive Committee of Phi Kappa Sigma to members who have truly dedicated their entire lives to the betterment of the Fraternity.

Alumnus of the Year
Is given annually to a Phi Kap alumnus who, by means of outstanding personal achievement, brings recognition to the Fraternity.

Dr. J. Karlem Riess Volunteer of the Year
Named after Past Grand Pi, Dr. J. Karlem Riess, Mu Chapter, Tulane University 1933 who lived his whole life through his Fraternity experience and strived always to pass that experience on to others. His legacy will live on through the hearts of all our members who continue to live through their Fraternity experience. The criteria for this award mirror Brother Riess’ passion to share the wisdom he imparted to us and by striving to similarly dedicate our lives in service to others.

The Estes Finance Cup
Named after Past Grand Alpha, Patrick M. Estes, Phi Chapter, University of Richmond 1890. The award is a silver goblet with an embedded gold badge and is given to the chapter which demonstrates the best management of its finances throughout the year. The award winner is determined by a system that weighs the submission of monthly finance report and budgets; and the prompt payment of new member, initiation, fall assessments, chapter assessment, and Grand Chapter fees.

Philanthropy Award
Is given to those Chapters who excel in their philanthropic activities. The chapters who raise the largest amount of proceeds through philanthropic events will be considered for this award. The chapter should strive to hold at least one fundraiser for our Fraternity’s philanthropy, The Leukemia and Lymphoma Society.